I started my second morning in Hungary  with an English Breakfast and coffe at the hotel, then I checked out and cycled to the bicycle workshop to leave my bicycle for service as planned since yesterday.

With a small rucksack I started to walk up to Avas hill. Upwards all the way and passing some residential areas but the landmark was hard to miss, the television tower was visible from everywhere. 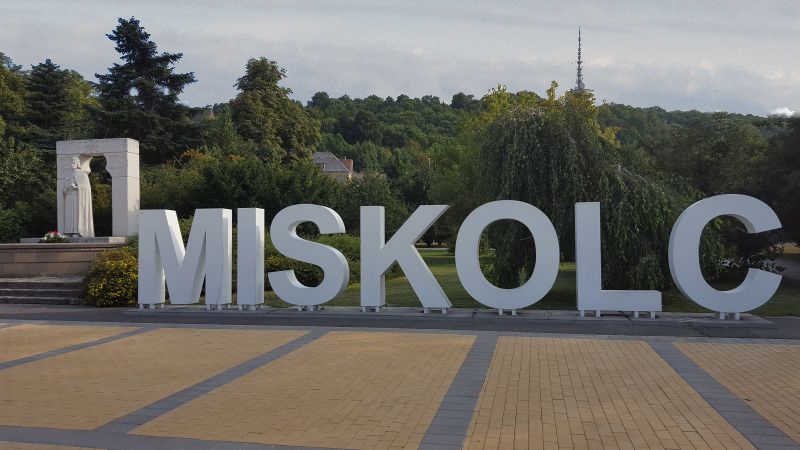 The sad thing was that the weather became more cloudy with risk for rain. Well up there I observe a luxurious views of Miskolc and it´s surroundings.

I chose another way back down to town, steeper, more na rrow and switchback-path similar. Much nicer, lots of flowers, trees and small houses.

Back in city I picked up my bike which was ready for more adventures and hardships.

Two hours after I visit Avas view point Chris and his girlfriend appeared at our meeting place at Tesco Express.

He described the best way to his address and 45 minutes later I stod infront of his residential buildings. He helped me to carry up my bicycle to his apartment

– It´s to risky to park your bike at the yard, even if you lock it up

We had a nice smal talk and a beer  before nightsleep. 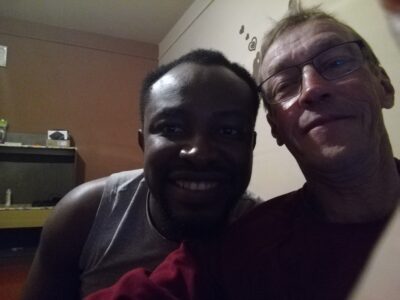 It’s not a five star hotel but the experience of sleeping with a totally strange Hungarian is great for me and Chris was really a nice person to learn.

Next day, I less than 100 km to Balmazujavaros which is my goal to day. 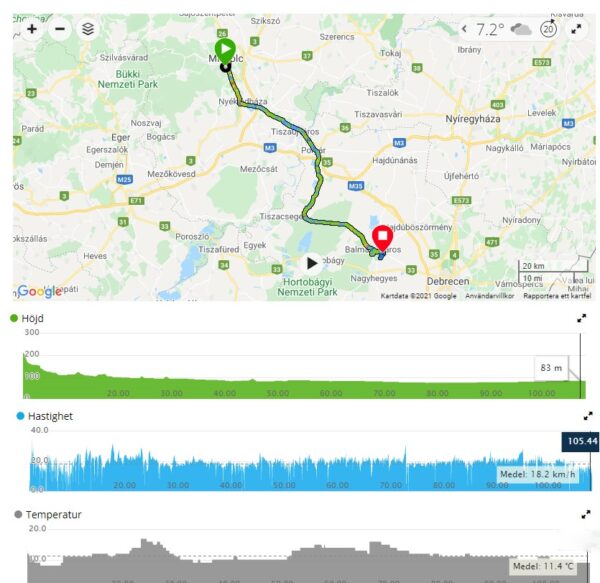 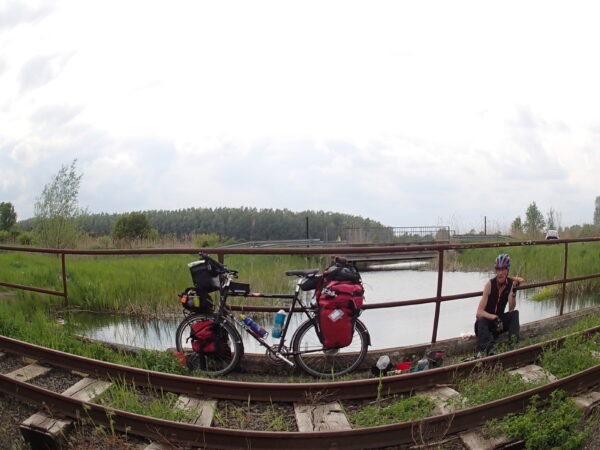 coffe break next to the railway track 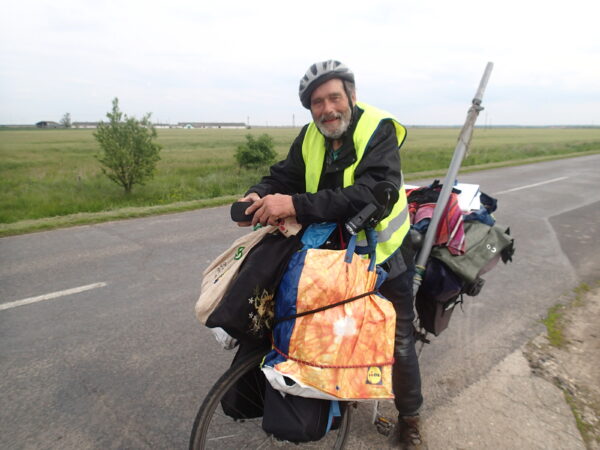 This guy from Germany had some odd packing

Balmazujavaros is a small village and I stoped only for  provision at rural shop.

While I prepare and pack my purchased groceries in my panniers, a boozer hanging around my bike and  talking incoherently. Tried to ignore him and cycled away.

When I pitched up my tent outside Balmazujavaros I noticed my cell phone was missing.

quite easy to pitch up a Hilleberg tent

Time has past  6 p.m and the rural shop closed so I had to wait until next morning bike back and ask if anyone found it, but I was sure the boozer stole my cell phone while I was packing food into my panniers.

I will kill the soon of a bitch.

A mobile phone is just more than a phone, it´s a life line to sister and friends, pictures, documents, addresses, codes, and you name it.

Day after I cycle back for searching my phone if someone ….! It was now I met an older well-dressed . He told me during our cycling that he spokes ten languages and was a proud father of two world-famous daughters, both Celione Dione and Maria Carey… !!!! Wow what a father 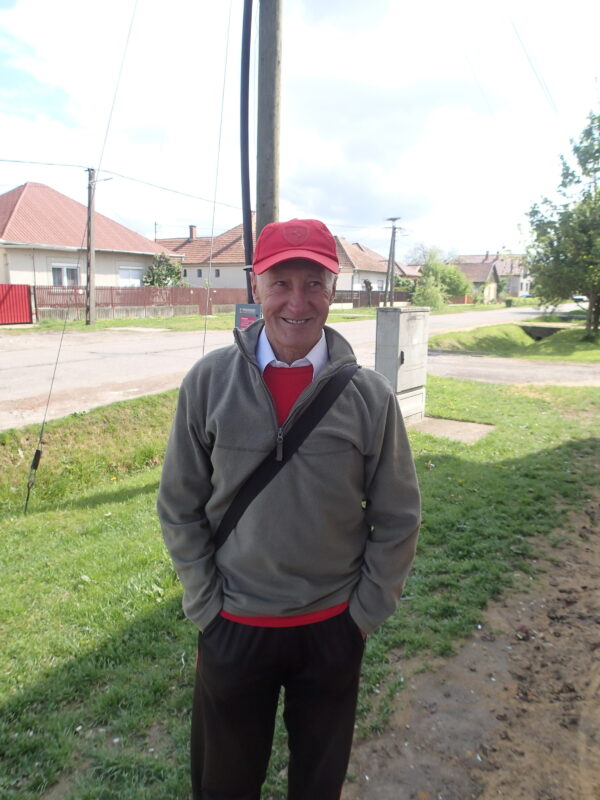 In Balmazujavaros this man told eme he was father to Celine Dion and Maria Carey…!

No Phone, it´s gone for ever  so I turned back for heading romania at Ártánd Border Crossing  75 km south.

For me as a Swede it´s always with joy to see a storkfamily. In Sweden they are very, very rare, only in the very south, Skåne if you are lucky get to see some couple. 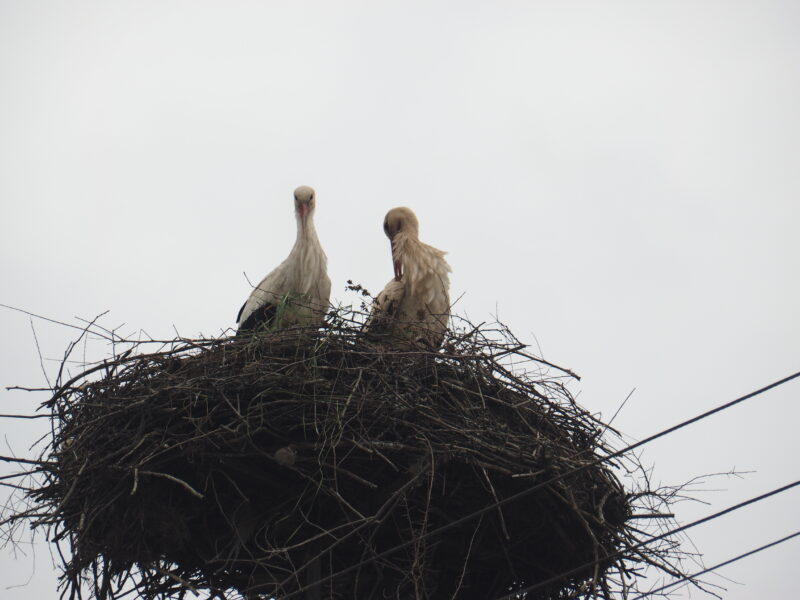 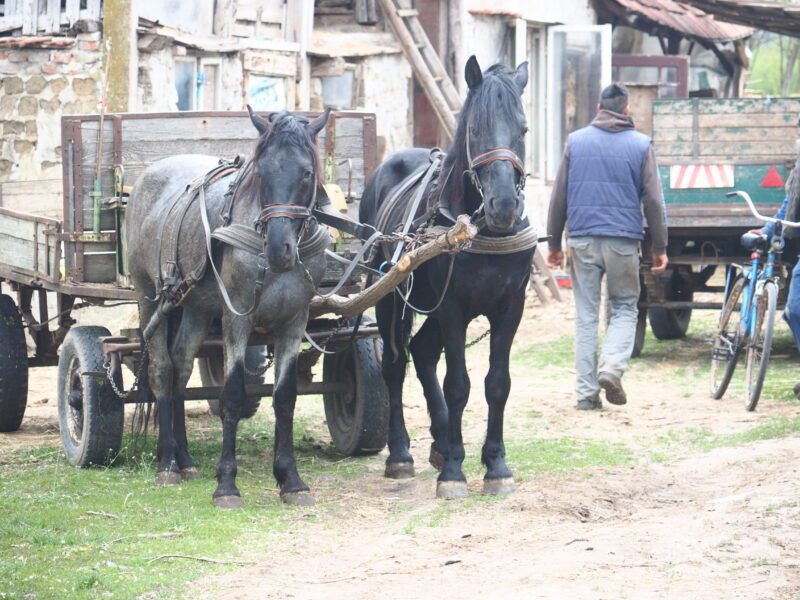 A day later just before 14:00, passing the border croosing and passcontrol in Ártánd and then I cycled into a Oradea, Romania. 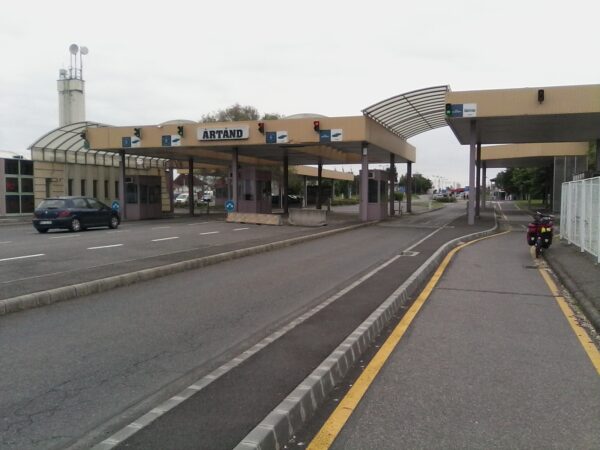 and I stopped at a big, clean and beautiful square close to Crişul Repede river 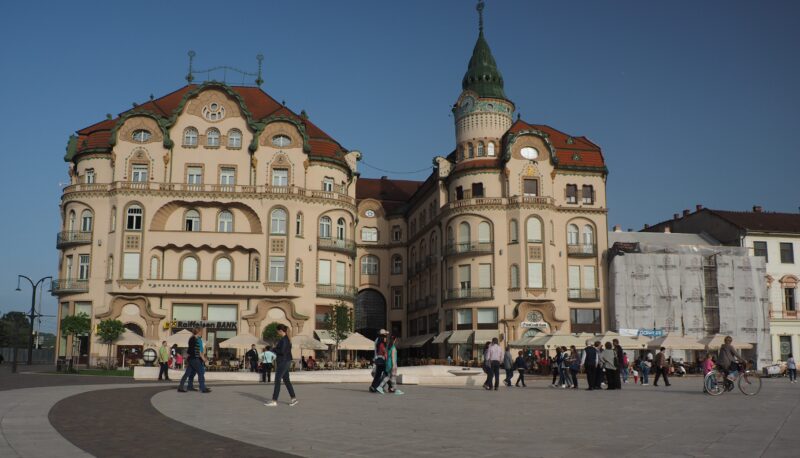 Oradea magnificet square where I stopped for coffe

I asked my self while sitting with my coffe… Why is the traffic so scanty, it´s monday?

Then I remember, today is it May 1, International Workers’ Day, also known as Labour Day and an official holiday even i Romania.

I continue drinking my coffee and eating one of my pizza slices which I had in handlebar bag and at the same time browsing on my Huawei MediaPad.

45 minutes coffe drinking and peeking on strolled DEVA citizens anf then I cycled around and across the river until my hunger told me to stop.

After a small alley outdoor cafes are lined up and after a certain inner persuasion, I sat down inside one of the restaurants and order a pizza.

Sat for two hours with my computer connected to their WiFi and at the same time as I myself felt relaxed.

A kind of inner harmony and calm had spread to my mental state despite the hassle and the loss of my cell phone, but fortunately you learn a lot from events like this.

Then I cycled ovet river Crişul Repede again and further south direction of Băile Felix which is a few km outside the city but the goal I have set is Drăgești.

The traffic has increased significantly, but it is quite easy to find your way out of Oradeao. Signs keep saying I’m on the right track.

It is noticeable that I have left Hungary’s flat and treeless pannonian steppes, now it’s more like Wales. Hills and small mountains everywhere and very green.

Passing many small and cozy villages and noticed the Romania’s Orthodox Catholic is very visible in the design of all churches, specialy the roofs and they are beutiful.

Romania is Wales look alike, grreen and many hills

On the very peak of a small hill and with a magnificent view over the valley below and nearby community I steered my bike a bit from the road and pitch up my tent.

Time has past 20:00, the air is lukewarm and only few clouds on the sky, so I calculated with a chilly night.

Has slept as well as possible despite the choice of my campsite beside the motorway and no rain.
Madness and crazy, but a fun experience in the end.

Today I’m going to cross the Slovenian border into Hungary. No checking, just passing the borderline. 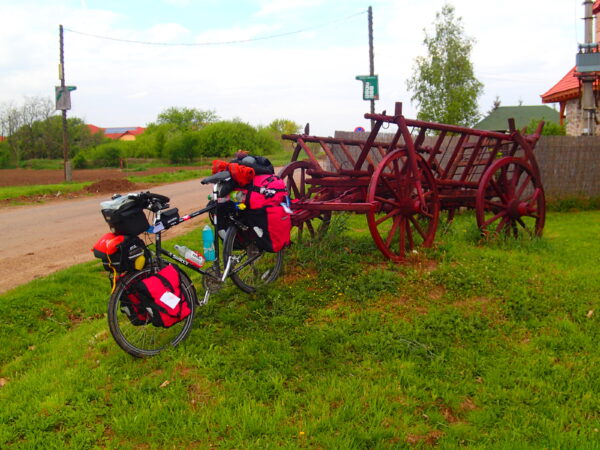 Maybe a new bicycle cart worth a try

After 70 km, heavy headwinds after dull road and many sunflower fields, has forgotten how many… 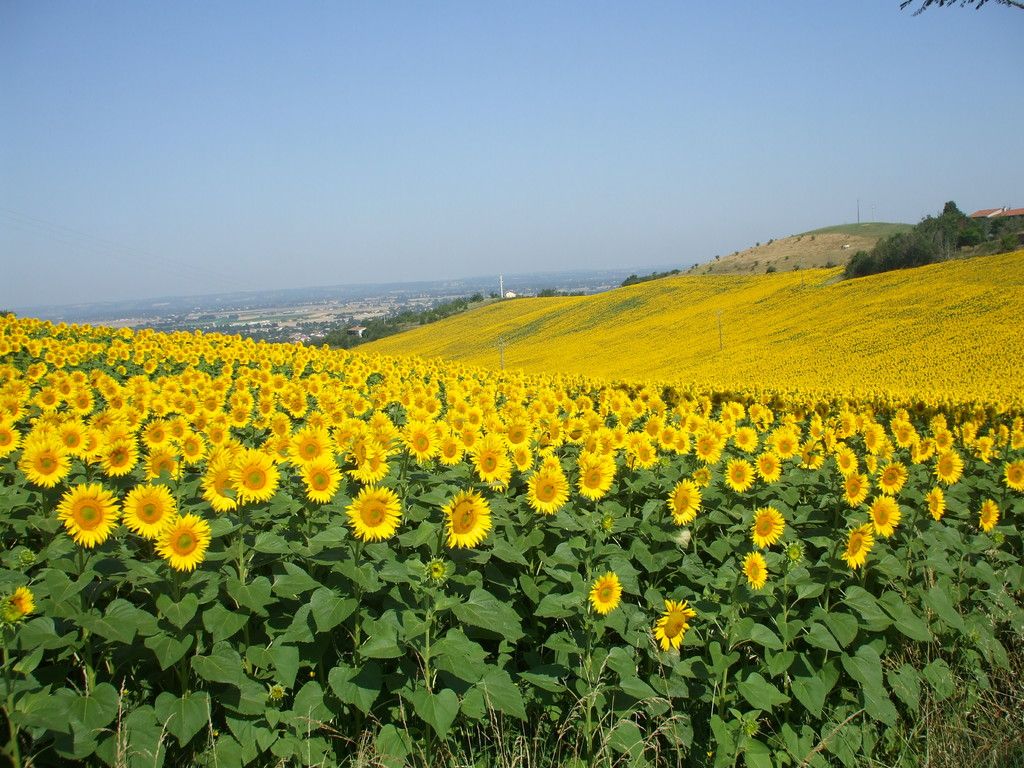 Hungary is widely known for their sunflower fields – they are everywhere

…I cycled into Miskolc few minutes after 12.

The first thing I did was look for a cafe and found severals after the shopping street.
While I was sitting in the afternoon sunshine drinking my coffe and beer I send a inquiry to a couchsurfing service for a one night bed or two!

Expected no response at all but within quarter I recived an answer from a person calling himself Chris.
He was positive and told me this very night was´nt possible but next one. His real name was Ugochukwu Anigu and we decided for a short meet outside Tesco Express tomorrow afternoon.

We switched mobilephone numbers and e-mails and he also gave me a brief description of where he lived. Has never tried this kind of accommodation before, so it will be a surprise.

When I cycled into Miskolc, I saw a tourist info poster  about The Avas which is a hill of volcanic origin and also a landmark for Miskolc. This visit have to wait until tomorrow morning.

After my coffebreak I searched for a hotel and no problem to find one.
Rest of afternoon I cycled aorund the citycenter, left my bicyclefor servivce with promise it would be finished before 15 p.m next day.
Later in evening I took a walkabout for eveningmeal and few beers.